Back to Safeguarding children

What is Domestic abuse?

"Any incident of threatening behaviour, violence or abuse (psychological, physical, sexual, financial or emotional) between adults who are or have been intimate partners or family members, regardless of gender or sexuality." (Home Office 2001)

There are different types of abuse which can include:

The prevalence and incidence of domestic abuse: 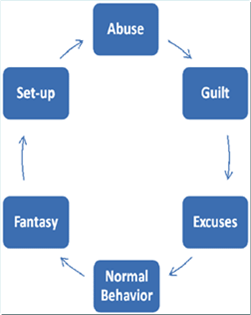 View the Home Office guidance on controlling and coercive behaviour

The profile of  perpetrator

An abuser may be impulsive & quick tempered but is able to demonstrate extra ordinary control when to do so is in his best interest i.e. around people he is trying to impress, the police, co-workers, the court, etc.

Ten facts about domestic abuse in England and Wales

Strangulation has only recently been identified as one of the most lethal forms of domestic violence but a north west study found that 56 % of people interviewed had suffered injuries related to strangulation. Serious damage from strangulation can occur after only ten seconds.

Financially the victim may be left with debts that they have been coerced into taking out in their name as well as the costs incurred through moving and re-establishing themselves. Victims often lose their jobs because of absenteeism due to both the effects of injuries, the undermining of employment by the perpetrator and during the process of leaving the relationship, this compounds the financial burden.

£1.2bn is cost to NHS in dealing with physical injuries caused by domestic abuse and the health related costs involved in treating a victim of rape is estimated to be £73,487 per case.

Domestic violence is a complex behaviour; the aim is to control and subdue the partner. Victims are placed in a position over time where they feel isolated and fearful; there are real worries about whether the violence will increase, whether the children will be next, can I leave, where do I go, how do I get money and how will I cope. Ending any relationship is a stressful event, but where there is domestic violence, the decision to do so is extremely difficult.

This is complicated by the fact that victims describe that their self-confidence has been totally eroded both as an individual and a parent, they don't know what to do or say to the children, the emotional effort of day to day parenting can become too exhausting to achieve and your emotional energy and focus is on the perpetrator.

Some victims are so concerned about not being able to manage a separation that they remain in the relationship, or are not able to maintain a separation as violence may continue (or they are manipulated into believing that things will be different) and so make a survival decision to remain.

It is therefore essential that no victim is made to separate from their partner without very careful assessment, planning and support leading up to and after separation. It is not the role of the health professional to provide this very specific and targeted support, the role of the health professional is to support and encourage the practitioner in accessing the most appropriate services.

The impact of domestic abuse on children

The harm that can be caused to children living with domestic violence can be:

Emotional: Hearing abusive and threatening language directed at the mother, observing the mother being humiliated and degraded; observing the violence directly or seeing injuries to the mother after the incident and feeling powerless to do anything; hearing their mother shout, scream and plea for help; seeing the police attend; seeing their mother being taken to hospital; being used by the abusive partner to spy on the mother, or being used as pawns to control the mother – particularly when separated and there are contact concerns

Psychological and social: Affecting their ability to form friendships and relationships as they may be withdrawn at school; frequent disruptions to life through moving home and school, sometimes at short notice; disrupting their education and their ability to gain from school; adversely affecting their attachment and relationship with either one or both parents; low self-esteem, increased levels of anxiety, anger and aggression, poor conflict resolution skills, nightmares, hyper-vigilance (e.g. not going to school so they can protect their mother), over-protectiveness and intrusive thoughts; difficulties with alcohol and substance misuse as a coping mechanism.

The impact will vary from child to child however, and will depend on a number of factors:

Unborn Children – pregnancy is a factor which is well associated with domestic violence developing or escalating. Where this is a factor, rates of miscarriage, premature birth, foetal injury and foetal death increase. The mother may be prevented from accessing ante-natal and post-natal care. There is also the danger that the mother's attachment to the unborn child can be affected, particularly if the pregnancy is as a result of rape

The Multi-Agency Risk Assessment Conference (MARAC) is part of a coordinated community response to domestic abuse, which aims to:

The meetings are chaired by the police and there is a core group of agencies that will have input into the majority of cases heard at the MARAC. This includes police, housing, health, social care plus other statutory and third sector organisations.

The information brought by agencies must be relevant and proportionate. It must be in line with the MARAC Information Sharing Protocol (ISP) and relevant legislation and guidance. It is vital that all relevant information is shared at the meeting.

Making a referral to MARAC

The way in which a referral to MARAC is made is slightly different depending on the MARAC meeting that you are referring to, this is governed by the Borough in which the victim lives. Comprehensive guidance including who can help you make the referral, the referral pathway and all relevant forms and documentation can be found here

What is an independent domestic violence advisor?

A definition from Safe Live

The main purpose of independent domestic violence advisors (IDVA) is to address the safety of victims at high risk of harm from intimate partners, ex-partners or family members to secure their safety and the safety of their children.  Serving as a victim's primary point of contact, IDVAs normally work with their clients from the point of crisis to assess the level of risk, discuss the range of suitable options and develop safety plans.

They are pro-active in implementing the plans, which address immediate safety, including practical steps to protect themselves and their children, as well as longer-term solutions. These plans will include actions from the MARAC as well as sanctions and remedies available through the criminal and civil courts, housing options and services available through other organisations. IDVAs support and work over the short- to medium-term to put them on the path to long-term safety.  They receive specialist accredited training and hold a nationally recognised qualification.

Since they work with the highest risk cases, IDVAs are most effective as part of an IDVA service and within a multi-agency framework. The IDVA's role in all multi-agency settings is to keep the client's perspective and safety at the centre of proceedings.

Studies have shown that when high risk clients engage with an IDVA, there are clear and measurable improvements in safety, including a reduction in the escalation and severity of abuse and a reduction or even cessation in repeat incidents of abuse.